The Houghton Mansion is an historic and famous haunted mansion located at 172 Church Street in North Adams, Massachusetts.  It was originally built by Albert Charles Houghton, President of the Arnold Print Works and first Mayor of North Adams, in the 1890’s for himself and his family. The following evidence is some of what we captured there during our investigation. I have also included several photos of the location below as this is an amazing architectural building, but has since been sold and is no longer open to the public. 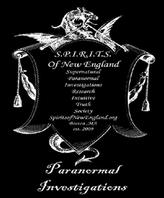 The following are EVP (Electronic Voice Phenomena), Photo, and Video evidence collected from some of our investigations. These files contain what our team believes to be evidence of paranormal activity. All data /evidence is collected using the scientific method of research, data collection and documentation for our investigations.

1. This first EVP was captured in the Map Room on the Main Gun Deck during setup of the DVR cameras. The interior of the ship is white in color so it took sometime to set up the IR cameras. You will hear our investigator roar as she celebrates finally getting a camera setup with no glare, this is followed by the evp of a spirit mimicking her.

2. This second evp was captured captured on the Main Gun Deck near the kitchen area on a recorder setup on the stove. You first hear the voice of the ships Boatswain's Mate followed by two very obvious sounds of what was later identified to our team during the reveal to the Captain and his Officers as a Starter Whip, This item was regularly used in the 1800's on the ships crew as an incentive to work.

3. This evp was captured on the Main Gun Deck in the Manager area, this is where live animals were kept as food for the ships crew. This was captured on the second night of the investigation. You will hear the ABHAN (Aviation Boatswain's Mate Aircraft Handler) describing the type of animals kept there, followed by one of our investigators saying "hmmm" acknowledging what was described, this is then followed by the voice of a young boy saying something.

Click the link below to watch the video and see all of the evidence collected during our Investigation of The U.S.S. Constitution

The Dean Winthrop House is for all purposes the "home field" of the S.P.I.R.I.T.S. of New England team. This is the main reason we have investigated it so often, and have a special connection to it, doing fundraisers for this historic site each year, and the reason our team founder Ellen MacNeil is a member of the board of directors of the Winthrop Improvement and Historical Society. The Deane Winthrop House, located at 40 Shirley Street in Winthrop, Massachusetts is the oldest continuously occupied wooden framed home in the United States.  It was originally built about 1637 by Captain William Pierce. In the early history of the American Colonies Pierce was one of the most celebrated and successful ships Captains in New England. The following evidence was captured over the dates described above, and this investigation was also featured on Haunted Case Files on Destination America in 2016, an in Jack Kenna's new book Paranormal Research-A Comprehensive Guide to Building a Strong Team.

It was the unique link between our team founder, Ms. Ellen MacNeil, and her participation on the Winthrop Improvement and Historical Society, that lead to the rare opportunity to investigate what might be considered the sister house to the historic Deane Winthrop House, the Fairbanks House in Dedham, Massachusetts. For those who do not know, these houses are the two oldest existing wooden homes in the United States. The Deane Winthrop having been originally built about 1637 by Captain William Pierce and then acquired by Deane Winthrop, the youngest son of John Winthrop the first Governor of Massachusetts, in 1647. The Fairbanks House in Dedham, MA was built between 1637 and 1641 for Jonathan and Grace Fairebanke and their six children. The following is just some of the evidence of paranormal activity that we captured in this beautiful and historical home. Based on the evidence we can say with confidence that the spirits of several of the Fairbanks family members still reside in their old homestead.

1. This first EVP was captured in the East Bedroom. You will hear one of our investigators cough and it is tagged by the other investigator, then there is an EVP of a voice that appears to be agreeing as to who coughed.

2. The following files are of the same disembodied sound that was captured on two different recorders at exactly the same time. The first file is from the recorder that the investigator was holding in his hand when the sound was captured. The second file is from a recorder that was left on a table in the South Bedroom. The investigators were located in the doorway to the East Bedroom which is about 15 feet from where the second recorder was located in the South Bedroom. Note the difference in the disembodied sounds on the two recorders. One sounds like a voice and the other sounds like a very strange noise.

1. The following EVP was captured in the client's kitchen during an initial EMF sweep of the home prior to the investigation. The client did report having experiences in the kitchen including seeing a ball of light move across the room and within minutes of leaving and re-entering the kitchen, finding all of the kitchen cabinet doors wide open.

2. The following EVP was captured in the client's basement living room during the second hour of the investigation between 10 pm and 11 pm. The voice can be heard over that of investigator Jack Kenna. It is a female voice but the voice of the other female investigator, Sharon Koogler, who was in the room at the time.  This was validated by Sharon herself and Jack who verified that this is not Sharon's voice and she did not say anything like this during the investigation, also our investigators abide by strict rules not to speak while another investigator is speaking and to tag any sounds, noises or voices that are made by them or another known source.

3. The following are actual disembodied footsteps and humming as well as an evp that were captured on a recorder located in the client's basement bedroom. Investigators Sharon Koogler, Ellen MacNeil and Sarah Campbell were investigating the client's bedroom at the time and could hear the footsteps coming from down the basement stairs, through the basement living room and into the hallway outside the bedroom. Sarah can be heard saying she hears someone humming upstairs but it was later verified by investigator Jack Kenna, who was upstairs with the client and his sister at the time, that no one upstairs was humming and no one. went down stairs during the time that these sounds were captured. It was also verified by the investigators themselves that no one came down stairs at that time. This was captured between 12 am and 1 am in the morning.

4. This evp was captured in the client's basement living room during the sixth hour of the investigation, between 2 am and 3 am. You can investigator Jack Kenna describing the shadow figure he had seen just moments before to investigator Sarah Campbell. You can hear a womans' voice under his, this is not Sarah, and then you can hear Sarah asking if the dark shadow had been human shaped.

5. Most of the activity experienced that night by the investigators occured during discussions of religion, God, Christ, and The Holy Trinity. This seemed to be very consistent with the reports of when activity occured the most by the client. The following evp was captured in the client's basement bedroom. Investigator Ellen Campbell was in the bedroom at the time with the client and they were discussing the something the client had just read. The first thing you will hear the client asking about how many deadly sins there are, then you will hear Ellen;s response, what follows next is the EVP that was captured. It is clearly a male voice but not that of the client.

1. The following EVPs were captured during our investigation of a clients home located in North Easton, MA. A followup investigation was later conducted in Feb 2010 with assistance from members of Ghost Quest, New Hampshire's Paranormal Research Society. These EVP's were validated by the leading members of Ghost Quest who have over 20 years of field experience. During the second investigation they conducted a cleansing of the home for the client. The client has stated that since the cleansing she no longer experiences any paranormal activity in the home and is able to sleep undisturbed through the night for the first time in many years.

2. This EVP was captured in the loft area of the home just shortly after we began setting up our equipment. No one was in this room at the time, we had completed our setup in this room and we were all downstairs in the living room. The loft is on the third floor of the home. You can hear the client's ceiling fan running in the background as this occurred before we went lights out.

3. This EVP was captured in the master bedroom.You will first hear the EVP followed by some clicking noises (a camera turning on) and then one of our investigators saying "Camera turning on." to "tag" the camera sound.

4. This EVP was captured in the loft area during the investigation. You will hear one of our investigators say "Is there anybody over here? You can talk to me." followed immediately by the EVP response to the investigator.

5. This EVP was captured in the loft area. You will hear one of our investigators ask "Is there anybody here?" followed by the EVP response.

7. This last EVP was also captured in the loft area. You will hear investigator Jack Kenna tell the spirit to "Bang on the wall", then he will state the temperature reading from his Mel-Meter, this is followed by the EVP.

1. The following video was captured during our investigation of a client's home located in Russell, MA. The video contains clips from what was a very interactive 15 minute KII session in the bedroom of the teenage daughter, where she reported experiences of being touched, seeing apparitions, and hearing voices.

1. The following EVP was captured in the client's basement. In this particular case we had the client participate in the investigation because we believed that if there was anything in the home it seemed to be attached or at least most active around her based on our interviews with her and her boyfriend. You will hear the client talking to whatever might be in the home, asking if it's a child and wants a hug, you will also hear three distinct knocks after she says "If you want a hug or something I'll be glad to give you one", it is very important to note that no one present heard these knocks, then you will hear the client say "I have hugs for everyone if you're a little kid" followed by a whispered voice saying "She wants to hug you" and then a child's voice saying "Don't touch me", then you will  hear the client speaking again.

2. Although the following is a video clip, it is the audio portion that this EVP was caught on. You will hear the investigator say "This is your opportunity for us to know you have something to say". What follows is a several second period of silence, followed by the sound of a vehicle on the road outside the home and a male voice whispering "I don't want to". The most interesting thing about this EVP is the fact that it was only captured on the camera's audio and not on any of the other recorders in the room. This was captured in the teenage daughter's upstairs front bedroom.