If you don't find the answer to your question here please contact us. We are here to help.

Looking for answers to your paranormal questions? You can find some of them here.

If you think you're experiencing a haunting or if you're interested in investigating the paranormal we are sure you have alot of questions. This page has been prepared by our team in order to try and answer some of the more frequent questions that our clients and new investigators ask us.

Q: I'm seeing and hearing things in my home that I can't explain. Am I crazy? Is my home haunted?

A:  First, just because you are seeing and hearing things in your home that you can't explain DOES NOT mean you are crazy, even if other members of your family aren't seeing or experiencing anything. As for the second part of this two part question, well this is a little more
difficult to answer without first gathering alot more information and perhaps even having a paranormal team conduct and investigation of your home or business. I prefer rephrasing this question first to ask "Is it possible that my home is haunted?" Yes, it is "possible". Here again, it is very important to first try a find "normal" or more natural causes for the things you are experiencing. For example, if you are hearing knocking or banging noises coming from your
creepy basement, you can check to see if you have loose heating or water pipes. If you get the sensation that someone is watching you, or perhaps hiding in the dark corners and shadows of that same "creepy" basement or attic, pick yourself up an inexpensive Electromagnetic Field (EMF) meter or hire an electrician to check your home for high EMF readings. Modern homes will have almost no EMF but the average home has EMF readings between 0 to 0.5 milligaus. EMF readings above 1.0 milligaus can cause some people to experience such physical and mental symptoms as headaches, anxiety, depression, nausea, fatigue, loss of libido, sleep disturbance, tiredness, restlessness, irritability, concentration problems, forgetfulness, learning difficulties, frequent infections, blood pressure changes, limb and joint pains, numbness or tingling sensations, tinnitus, hearing loss, impaired balance, giddiness, eye problems and hallucinations. There are two quotes from Sherlock Holmes that I feel are extremely relavent when trying to determine if a home or business is possibly haunted and they are, 1) "It is a capital mistake to theorize before you have all the evidence. It biases the judgment." and 2) "...when you have eliminated the impossible, whatever remains, however improbable, must be the truth."

IMPORTANT: Before you begin to think that your home may be haunted, it is very important to understand that investigation groups like TAPS as well as many others find that only a very small percentage of the homes they investigate have any true paranormal activity going on, and even a smaller percentage of those are actually haunted. So in reality the chances that your
home is haunted by a spirit or entity are extremely small. It is more likely that there are more "natural" explanations to what you are experiencing. This is where it can be very useful and comforting to call on the services of an experienced paranormal investigation team, that uses scientific methods of investigation, to come into your home to help you determine the actual causes of your experiences.

Q: How do I get rid of what's haunting my home/my business?

A: * A ghost - or spirit or apparition - is the energy, soul or personality of a person who has died and has somehow gotten stuck between this plane of existence and the next. Most researchers believe that these spirits do not know they are dead. Very often they have died under
traumatic, unusual or highly emotional circumstances. Ghosts can be perceived by the living in a number of ways: through sight (apparitions), sound (voices), smell (frangrances and odors), touch - and sometimes they can just be sensed.

Q: What is a Poltergeist?

A: * "Poltergeist" is a German word meaning "noisy spirit." Current research indicates, however, that poltergeist activity may have nothing to do with ghosts or spirits. Since the activity seems to center around an individual, it is believed that it is caused by the subconscious mind of that individual. It is, in effect, psychokinetic activity. The individual is often under emotional, psychological or physical stress (even going through puberty). Effects can include rappings on walls and floors, the physical movement of objects, effects on lights and other electric appliances - even the manifestation of physical phenomena.

Q: Is the Ouija board dangerous?

A: * Most paranormal researchers advise against the casual use of the Ouija board, suggesting that it can be a doorway to unknown dimensions. “The board itself is not dangerous, but the form of communication that you are attempting often is," says Ghost researcher Dale Kaczmarek of the Ghost Research Society. "Most often the spirits whom are contacted through the Ouija are those whom reside on 'the lower astral plane.' These spirits are often very
confused and may have died a violent or sudden death; murder, suicide, etc. Therefore, many violent, negative and potentially dangerous conditions are present to those using the board. Often times several spirits will attempt to come through at the same time but the real danger lies when you ask for physical proof of their existence! You might say, 'Well, if you're really a spirit, then put out this light or move that object!' What you have just done is simple, you
have 'opened a doorway' and allowed them to enter into the physical world and future problems can and often do arise."

Q: But what if the Ouija really does not contact spirits? What if it only accesses our own subconscious?

A: The advice might be the same. Since there are realativly few accounts of positive, uplifting
experiences with the Ouija, and many negative ones, we might assume that it is more attuned to the negative aspects of our subconscious.

NOTE: If you're still determined to use the Ouija despite the warnings and potential negative consequences, it is STRONGLY recommended that you follow these rules of precaution:

Q: Is there a scientific explanation for how the Ouija Board works?

A: * Skeptics say that the Ouija moves due to the "ideomotor effect" (sometimes called "automatism"). The ideomotor effect refers to the involuntary and unconscious motor behavior of a person. The term "ideomotor action" was coined by William Carpenter in 1882 in
his explanation for the movements of dowsing rods and pendulums by dowsers, table turning by spirit mediums and, of course, the movement of pointers on Ouija boards.

Carpenter argued that muscular movement can be initiated by the mind independently of volition or emotions. We may not be aware of it, but suggestions can be made to the mind by others or by observations. Those suggestions can influence the mind and affect motor behavior. What is purely physiological, however, appears to some to be paranormal. The skeptical explanation does not, however, account for predictive events and other phenomena sometimes associated with the Ouija.

Q: Are demonic hauntings real? How often do they happen?

A: YES, demonic hauntings are real, but they are EXTREMELY RARE. This interview by MTV writer Katie Calautti with demonologist Katie Boyd best answers these questions. You can also access additional information on this subject on Katie Boyd's web site at http://www.ancientwisdomnh.com. The following is directly copied from the MTV interview with Katie Boyd:

REEL TALK: CAN I GET A WITNESS?
I hate to burst your holy water-filled bubble, but the majority of what’s portrayed of exorcism in movies is about 500 tumbles down the Exorcist Steps from accurate. I asked demonologist and author Katie Boyd to dispel some of the Tinseltown-perpetuated myths.

Boyd –- who has over 20 years of experience under her belt as a demonologist, exorcist and occult sciences and crimes expert –- assured me that demonic possession is a very real (albeit incredibly rare) occurrence. Rest assured, all ye paranormal-paranoid peeps: according to Katie, you have a better chance of winning the lottery than you do of having your person perpetrated by a wayward soul.

First and foremost, I had to make an observation: is it a coincidence that lady-folk are generally victims of demonic possession in movies? Boyd said that, though women as a general rule are more psychically open, demonic possession knows no age, religion, race or gender. The main characteristic a soul-seeking spirit requires is a lowered will: they often target folks who are experiencing a crisis of faith, or people whose mental defenses have been softened, such as those who are on heavy regimens of mind-altering medication to treat severe illnesses, such as schizophrenia.

Apparently, like any other involved undertaking, exorcism also requires a lot of paperwork and red tape if performed properly. Since an incredibly small percentage of cases end up being true-blue demonic possessions, painstaking amounts of care and research must be performed prior to the rituals we see stars on screen rush into, guns and crucifixes a-blazing.

In reality, a potential victim’s medical and psychological history and home environment are scrutinized, religious elders are called in to assess (and bless) the situation, and –- if an exorcism is necessary -– health professionals must be present, and family members are generally barred from the premises. “I’ve personally never seen people spit up pea soup-like vomit or someone walking on the ceiling or someone’s head spinning,” Boyd noted.

So where does Hollywood actually get it right?

Boyd admits that no one movie is 100% on the mark, but, “If you take little bits of 'The Exorcist' and little bits of 'Emily Rose' and you kind of put a couple of those snippets together, you’ve got a pretty good idea of what a real exorcist or exorcism is like.”

For example: the scene in "The Exorcist" that details the demonic entity taking on the personality of the priest’s mother, psychically knowing details about his relationship with her that no one else could know, using his deep-seated guilt against him, that is something Boyd says is commonly seen in spiritual hauntings and demonic possessions.

Other factors: phrases, scratches and symbols written on the skin that disappear an hour or two later, the body stiffening and contorting into abnormal positions, strange voices emanating from a victim, seizures. These are all phenomena that Boyd has witnessed on the job.

So what’s the craziest thing Boyd has encountered during an exorcism? “What’s really scary and what a lot of people don’t know is that the victims are very aware of what’s going on with their bodies during possession and they don’t have control over it,” she said.

“When you’re talking to the individual and suddenly the individual’s body starts to seize up and you can see the terror in the person’s eyes as their body is being bent in different ways – to me, that is the scariest thing I’ve ever seen… literally hearing bones crack… it is like watching the worst horror movie but knowing it’s true.”

I'm betting that it’s only a matter of time before Hollywood screenwriters pounce on the dark side of the public’s obsession with all things Malevolent Spirit. The very real misdiagnoses and hysteria, inexperienced or fraudulent folks performing exorcisms, the resulting deaths... all alarming byproducts which Boyd works to educate the public about through her literature, public speaking engagements and radio show (which airs onTenacityRadio.com every Monday night from 5-6pm ET). Still – she’s willing to admit that -– with a healthy, realistic outlook -– these movies are exactly what they should be: harmless entertainment.

“I’m really interested to see 'The Last Exorcism,' actually,” she said, laughing, though her full enjoyment of the film isn’t immune to her various occupational hazards. “I’m sure I’m probably going to roll my eyes a little.”

* This information was taken directly from a posting by Stephen Wagner on the About.com Guide. 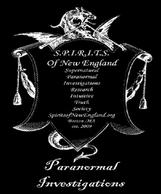 EMAIL US  spiritsofnewengland.org@gmail.com
View on Mobile